This is an update to the previously posted FRS/GMRS Radio Primer article by John Beaston.

In its May 2017 meeting, the FCC made significant changes to the FRS and GMRS services. These rule changes are basically good news for NETs. Here’s a summary of the changes:

With the stroke of the pen, most hand-held, walkie-talkie combo FRS/GMRS radios will be reclassified as FRS-only radios. This was accomplished by raising the FRS maximum power level regulation to 2 watts (which covers the HIGH power setting on many radios) and by expanding the allowed FRS channels to include all 22 channels. These regulatory changes fold most existing radios under the FRS umbrella. And since the FRS service has no license requirement, any NET will be able to use any of the 22 channels.

What happened to GMRS? Well, it’s still there for those wanting higher power levels, detachable antennas and/or repeater operation. The GMRS channels now overlap the FRS channels so the two services can inter-operate on all 22 channels. GMRS users can still use up to 50 watts, have detachable antennas, and operate repeaters. As previously, a no-exam, $65 license is required but the license term has been extended from 5 to 10 years. As before, a call sign is issued and transmissions must be identified every 15 minutes. Basically, the potential for unwanted interference is so much greater with 50 watts, repeaters, and the potential of larger, higher antennas, the FCC wanted to be able to identify a user if it became necessary.

Note that higher power combo radios (such as the Midland GXT1000) and radios supporting repeater operation (such as the Motorola MS350R) will be reclassified as GMRS. A GMRS license would be required to operate these radios.

Eventually there will be no more combo FRS/GMRS radios. Any particular radio will be classified for one service or the other. The new rules took effect at the end of Sept 2017. Some provisions for manufacturers are phased in over 18 month to two years. This allows manufacturers to clear inventory, adjust marketing and develop new products.

FRS/GMRS radios are the go-to radios for most intra-team NET communication. Every NET member should have one in their go-kit. Here’s what you need to know about the world of FRS/GMRS to be an effective (and legal) FRS/GMRS operator. There is also some buying advice for those who still need to get their radio.

FRS and GMRS are two overlapping radio services defined by the FCC.

FRS (Family Radio Service) is free, and no license is required. It offers a short range of operation due to low power and antenna restrictions.

GMRS (General Mobile Radio Service) covers a much farther range through higher power and the options of external antennas and repeater operation. However, it requires a license. The license is $65 for 5 years with a simple, online application. There is no exam. The license covers your entire “family.”

The services have 22 channels – some are shared and some are exclusive for the particular service. 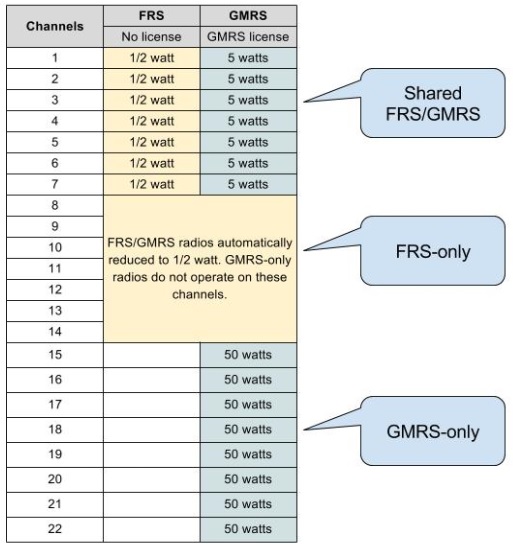 It is your responsibility to operate your radio in a legal manner.

Each NET team is assigned a channel from 2-7. Channel 1 is informally recognized as a national calling channel for emergencies. Using the shared FRS/GMRS channels allows for teams to have both unlicensed and licensed team members. The non-licensed members are restricted to low power while the licensed members may use higher power.

Ninety-nine percent of today’s consumer handheld radios cover both services. The exceptions are GMRS-only radios which we’ll cover below. All of the dual-service radios automatically reduce power on the FRS-only channels 8-14. On the shared FRS/GMRS channels 1-7 however it is the user’s responsibility to use low power if they are not licensed. While it is simple to do, each manufacture has a different way to do this. Some radios (newer Motorola models) have two PTT (Push-To-Talk) buttons – one for low power and one for high power. Nice and simple. Other radios (Midland, et al) have a menu option to set power level on a channel-by-channel basis.  It seems that these radios come from the factory with the default power level set to high. If you are not licensed, you will need to consult your radio manual on how to reduce power on the shared channels.

One caveat: A few older dual-service radios do not have the ability to reduce power on the shared FRS/GMRS channels. Unfortunately, this renders the radio useable to GMRS-licensed members only. If you think you may have one of these radios, your team ARO may be able to help you check if you are concerned.

Of course, in an emergency involving the threat of life safety or imminent property damage, you may operate on any channel with any power level. 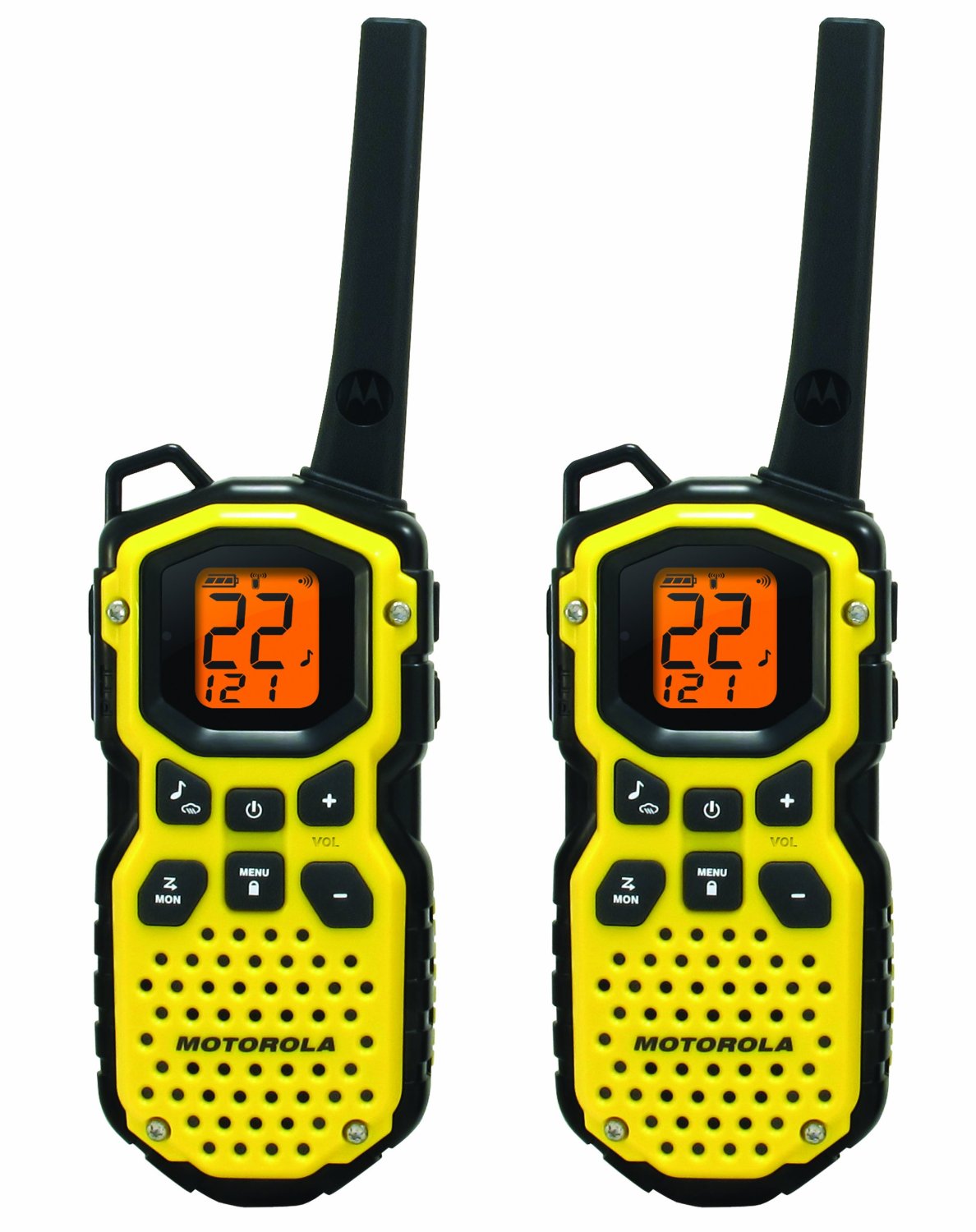 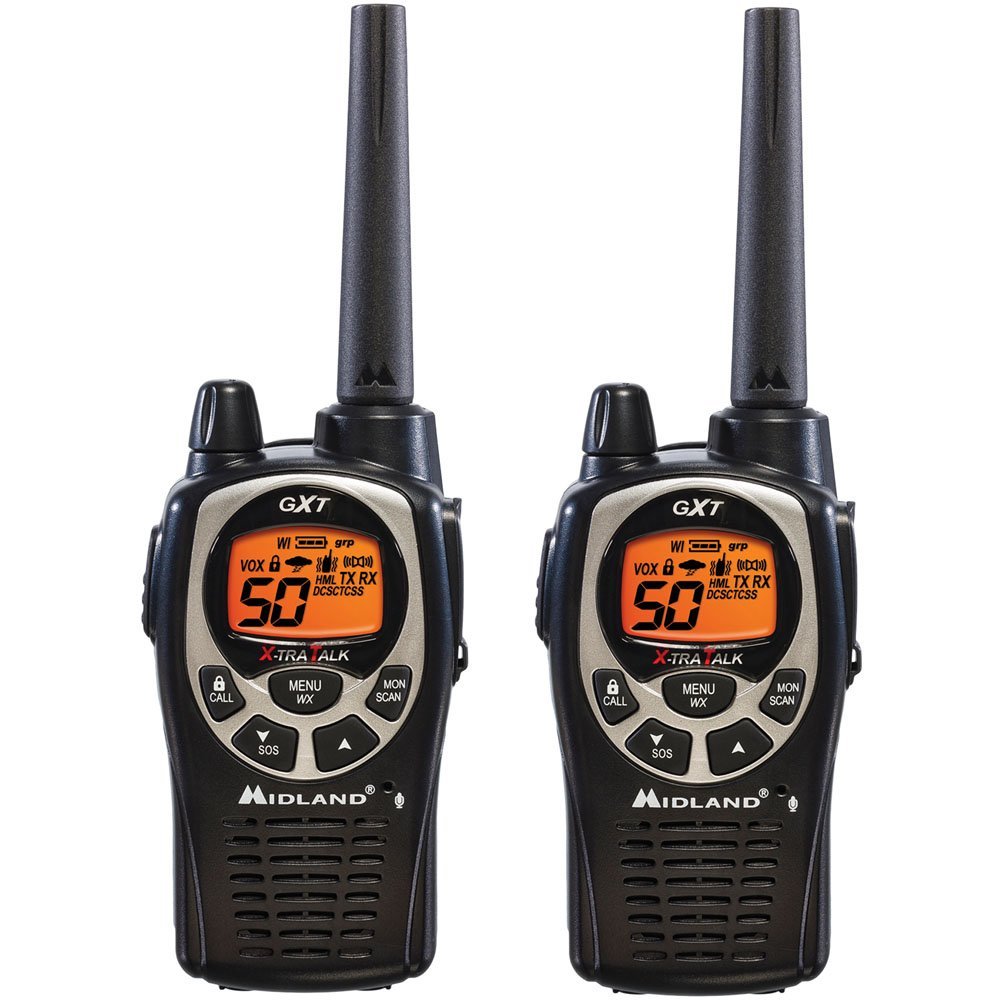 Manufacturers offer a huge range of FRS/GMRS radios. The choice is staggering and the selection seems to change monthly as models come and go. Prices range from $25 to $150. How to choose? While Portland NET cannot officially recommend any particular radio, the RTL (Radio Training Liaisons) have pooled our collective wisdom and come up with the following suggested feature set and a list of radios that come close to meeting them.

As of late 2016, there are two GMRS-only radios. Basically, a GMRS-only radio gives up the ability to transmit on the FRS-only channels (7-14) but retains the shared FRS/GMRS channels and gains the options of higher power and use of an external antenna. Both can significantly increase the available range and could be useful for teams needing more geographic coverage.

The Midland MXT100 is a mobile GMRS-only radio with five watts and a magnetic-mount external antenna. It does not contain batteries but uses a cig-lighter plug for powering off a vehicle 12v system. The radio is quite small and includes a quick release bracket for easy vehicle changes. Here’s a link to an earlier, more detailed NET review.

The BTech/Baofeng GMRS-V1 is a handheld GMRS-only radio. It has the ability to transmit on any GMRS channel including GMRS repeaters. It can also be programmed to receive VHF/UHF ham, public service, NOAA, and FM broadcasts. It has a replaceable antenna. It is also a 5-watt radio. Many battery, antenna, and earbud/mic options are available.

What About the Baofeng UV-5R and Their Ilk?

As they say, “It’s complicated.” Basically, the UV-5R is not FCC accepted for either FRS or GMRS. While it is possible to program the UV-5R to transmit on FRS/GMRS frequencies, it is illegal to transmit on those channels except during an emergency. That little caveat is why many NET AROs have a UV-5R in the radio stash. NET AROs can use the UV-5R as their ham handheld and monitor FRS/GMRS channels at the same time. They typically have a regular dual-service FRS/GMRS handheld for transmitting on the channels. If push came to shove in an emergency, they could use the UV-5R for FRS/GMRS as well as ham.

The FCC allows for repeaters in the GMRS service. A GMRS repeater can dramatically increase the coverage area. There are currently no GMRS repeaters in the Portland area although several NET teams in geographically challenging areas are considering them. If anyone is interested in the topic, a good resource is myGMRS. 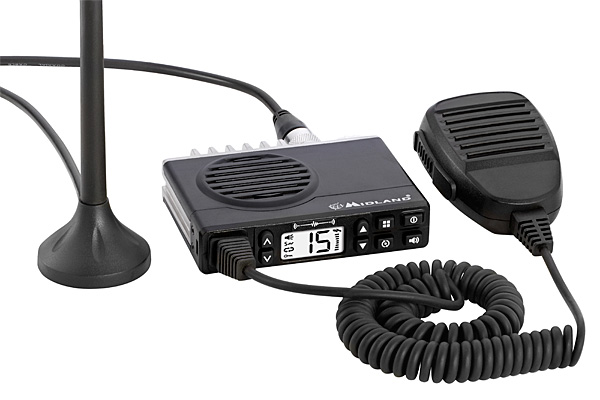 The Midland MXT100 is a GMRS-only radio. The manufacturer’s list price is $150, but is currently listed on Amazon for $119. Locally you can find it at Bimart for $130.

Credit: Thanks to Marino KG7EMV for the loan of the radio.