We get so sophisticated and we have gotten so used to the reliability and resilience in our wireless and wired and our broadcast industry and all of our public safety communications, that we can never fathom that they’ll fail. They do. They have. They will. I think a strong Amateur Radio community [needs to be] plugged into these plans.

We have created a calendar and a spreadsheet that show meetings held by radio (“nets”) as well as in-person and Internet events. The first section shows recurring that happen every week.  It is followed by a section sorted chronologically that shows events that don’t occur every week.

The Role of Amateur Radio

Ham radio operators by the hundreds volunteered for service to the devastated areas of the Gulf Coast after Hurricane Katrina and her sisters, Rita and Wilma, pounded a five-state area and destroyed other communications systems. For their life-saving work, the hams received commendations from the President and Congress, as well as international praise. It truly proved the saying, “When all else fails, ham radio works!”

Within minutes of the September 11, 2001, terrorist attacks, ham operators were busy communicating from emergency operations systems. The ham operators continued for weeks, as the amateurs handled emergency and other important messages for disaster and government agencies, as well as for displaced families.

Hams use all sorts of radios and antennas on a wide variety of frequencies to communicate with other hams across town, or around the world. They use ham radio for personal enjoyment, for keeping in touch with friends and family, for public service communications and to experiment with radio technology.

You Can Have This Capability for Yourself and Your Family

For details and to register for these classes, click on this link for the NET Radio Workshop Portal

The Amateur Radio Relay League (ARRL) is the national host organization for the hobby.  Among its many roles, it serves as a major Volunteer Examination Coordinators, training and certifying Volunteer Examiners (VEs) who administer the amateur radio licensing tests for the Federal Communication Commission (FCC).  It publishes a list of testing options by location

For details and to register for these exams, click on this link for the NET Radio Workshop Portal

NET ARO Training workshops are held at the PCC Cascade Campus about a two or three weeks after the licensing event.  There will be concurrent workshops held for NET hams who want to earn their ARO certification and for current AROs who want more intensive training in advanced topics.  For details and to register for these workshops, click on this link for the NET Radio Workshop Portal

Listen into Amateur Radio Nets without a License

A lot of the learning opportunities exist “on the air” in amateur radio nets.  The weekly Portland NET Net has a curriculum that covers topics direct interest to both new hams and folks thinking about becoming hams.  For example, they talk about how to pick out a first amateur radio hand-held radio for emergency communications that would also be suitable for search and rescue operations.

To listen to these nets, however, you have to be able to listen in on amateur radio frequencies.  That would seem to be an expensive undertaking, even if you could figure out how to do it.  Wrong.  There are several inexpensive ways to start listening to ham radio forums and nets without a ham license, and we explain all that on the PortlandPrepares.org web page entitled “Listen In!”.

Keep up to Date with the PDX ARO Resource Page

Another great list of up-to-date events, courses, and resources is a Google Doc maintained by one of the Portland NET Net Control and NET class instructors, Bruce Schafer AA7PB.   The PDX NET ARO Info doc is described by its authors as a list of sources of training, learning, supplies and equipment.  Among the topics listed are:

That gives you a rough idea, but by all means check it out. 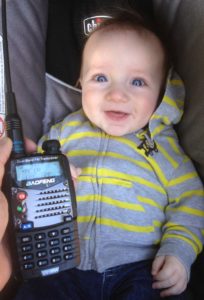 Getting the license is only the first step on the road to becoming an amateur radio operator.  Many who pass the license regrettably never buy a radio, much less learn to use one.  The links below take you to the next levels.